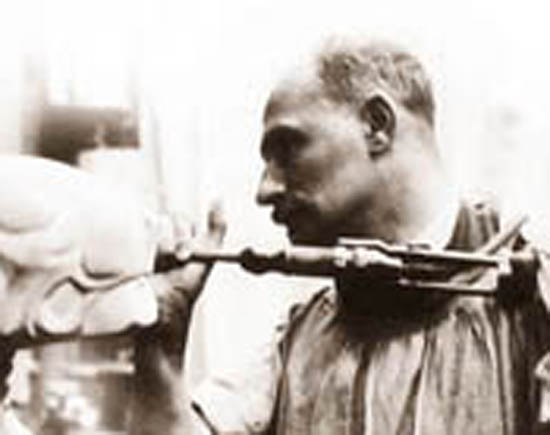 Maurice Gaston Elie Joseph Prost (1894-1967) studied under the sculptor Léopold Morice. But it was Charles Valton who revealed his vocation as an animalier. In 1913 Prost took an apprenticeship at the studio of Gauthier, a Parisian goldsmith. However, his training as a goldsmith came to an abrupt end following the outbreak of the First World War. Prost enlisted and was dispatched to the front at Argonne. Within the first few months of the war he was gravely injured and transferred to a military hospital where his left arm was amputated due to gangrene. Newly disabled, he was unable to continue the profession of goldsmith. Prost was determined to pursue an artistic career and took up sculpture. After spending some time in Montpellier, he returned to Paris in 1918. He then went daily to the Jardin des Plantes to draw and model animals. There he met the other animal sculptors with whom he closed sincere friendships. Initially modelling his subjects in clay, he changed from 1922 to direct carving with the help of his wife. In 1927, the proximity of a glassmaking workshop gave him the idea of using a compressed air machine to activate a pneumatic hammer, which he adapted and developed with the help of the Appliance Services of the Secretary of State for Veterans Affairs. From now on, he could practice direct carving without any help.

Prost exhibited as of 1921 at the Salon des Artistes Français where he continued to present his work and at the Salon des Artistes Indépendants as well. He also regularly presented works at the Salon d'Automne until 1966, the year before his death. In 1922 at the ‘Salon des Artistes Français he received a medal of honour and after that his career really took of.  Maurice Prost exhibited permanently at the Galerie Susse in Paris until after the second world war. His works were among the most sold of this gallery. He exhibited in 1928 at the first Salon des Artistes Mutilés et Blessés de Guerre on the Champs-Elysées, an event where the inauguration brought together the entire French political class and the international press. Prost presented his Black Panther at the 1931 Colonial Exhibition. After that he created numerous monumental sculptures for cities and institutions.