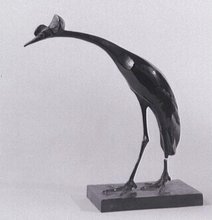 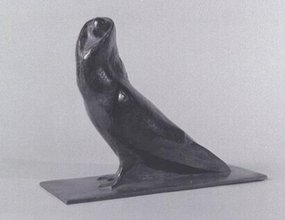 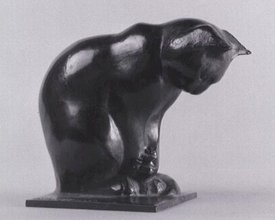 Anne-Marie Profillet is born in Rennes in 1898. Her father is a professional soldier (commander of an artillery squadron), and she grows up as the youngest of four girls. She was soon noticed for her willpower and her sharp intellect. Although her father was regularly transferred to a new post and Anne-Marie regularly had to adapt to a new environment and a new school, she passed the national final examination in French with a (almost never awarded) perfect score of 20/20, which, according to the examination committee, predestined her for a career as a writer or professor of French literature.

However, her love of drawing was greater than her love of the French language, and she took drawing and painting classes with Professor Biloul at the "Ecole de Paris". He taught painting and drawing in the vein of the great academic French tradition. Anne-Marie wanted to be original and found Biloul's lessons rather soporific. At the same time, she also took lessons with Paul Vitry at the "Ecole du Louvre". Paul Vitry supervised the sculpture gallery of the Louvre and managed to arouse Anne-Marie's enthusiasm for sculpture. Rather than attending sculpture classes, Anne-Marie Profillet wanted to learn to sculpt herself and enrolled at the "Ecole des Beaux Arts", where she took classes with Edouard Navellier. Navellier was an animalier, a genre that pleased Anne-Marie Profillet because it was disregarded and considered inferior by the traditional academic art schools. Together with her fellow students, she modelled in the Jardin des Plantes in Paris. Through Navellier she learns to model animals in plaster and clay, but she also learns the so-called taille directe (carving and chiselling in wood and in stone), a labour-intensive method that she prefers. Her fellow pupil and friend Charles Artus thinks that the physical labour of the taille directe' is nothing for a woman. He proposes to chisel the statues in wood and stone for her. An offer she refuses because Profillet enjoys the physical labour and the confrontation with the unruly material.

In 1926 Anne-Marie Profillet exhibits her sculptures for the first time at the autumnal salon in Paris. Her statues are widely acclaimed and a number reproduced and published by the Manufacture de Sèvres.

While modelling in the Jardin des Plantes, she is approached by François Pompon in 1929, and although the age difference is huge it is the start of a mutual friendship, appreciation and respect that will last until Pompon's death in 1933. François Pompon refuses pupils, but surrounds himself with younger artists whose originality and talent he recognizes, and whom he accompanies and advises. In 1931, following a tradition started by Georges Gardet, Pompon invites a number of sculptors to form a group, that will go down in history as "the group of the twelve". Besides Pompon, who acts as a kind of chief and figurehead, there are his younger confidants and disciples, Paul Jouve, Jane Poupelet, Adrienne Jouclard and Anne-Marie Profillet. These five are complemented by other prominent artists sculptors such as Charles Artus, Gaston Chopard, Georges Guyot, Georges Hilbert, Marcel Lémar, André Margat and Jean-Claude de Saint-Marceaux. This group of sculptors/artists exhibits at the Salons de l'Hôtel Jacques-Émile Ruhlmann in 1932 and 1933 and also invites other meritorious artists such as Auguste Tremont, Armand Petersen, Herbert Haseltine and Simon Bussy. The sudden death of her friend François Pompon, after a prostate operation, in 1933 is a blow to Anne-Marie. The death of her mother in 1938 saddens her deeply. Since her pleurisy in 1927, Anne-Marie has been in poor health. After her mother's death her health situation worsens. She is hospitalized and undergoes surgery. Two days later on 6 June 1939, she succumbs. She is then 40 years old.

She leaves behind an oeuvre of some seventy works. Sometimes she is regarded as an imitator of Pompon. But Pompon admired Anne-Marie Profillet, not only because of the technical execution of her sculptures but because she managed to depict something spontaneous and unexpected in the animals she portrayed.

Several of her works are part of the collection of the Centre Pompidou in Paris.