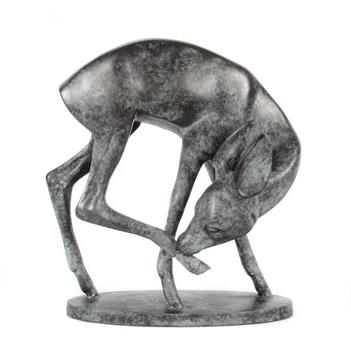 Sculptor and medallist, pupil of Rudolf Bosselt in Darmstadt.  Visits to Paris, Italy and Spain to study. Pauschinger taught at the Staatsbauschule in Stuttgart and was a member of the Künstlerbund of Stuttgart.

Created several models of does and deer, one of which served as an emblem for the "Berlin Hunting Club", which was reserved for the notables of the German high society. Some of Pauschinger models strongly resemble stylistically the statues of Fritz von Graevenitz, whose work he must have known as von Graevenitz was also a teacher at the Stuttgart Academy of Fine Arts. Fritz von Graevenitz was a sculptor who was personally placed by Hitler on his list of Gottbegnadeten (God blessed) artists.