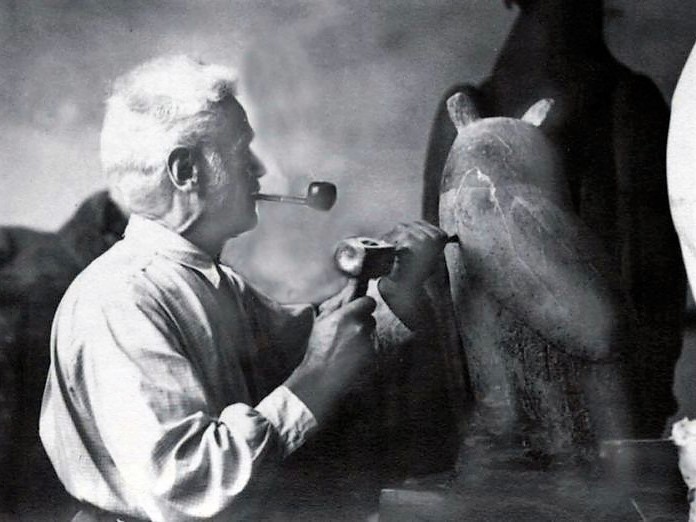 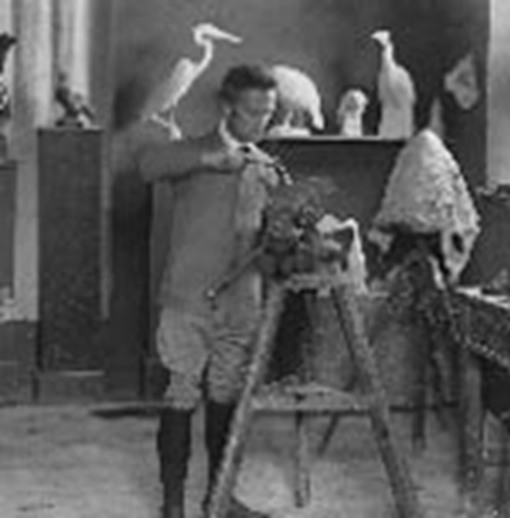 Wilhelm Krieger was the son of the painter Eduard Theodor Krieger. He was born on the East Frisian Island of Norderney in the North Sea. He quickly left the island and lived as a pupil with relatives in Norden where he attended the gymnasium. Most of his life, however, was spent in Munich and the nearby city of Herrsching am Ammersee.

He left Norden without finishing school and began a three-year apprenticeship as a decorative painter in Bremen. He left for Munich in 1896 without finishing this apprenticeship. There he enrolled in the Kunstgewerbeschule 1896/1897, but abandoned this school after one semester. He took up painting again and became a member of the Vereinigte Werkstätten München (similar to the arts and crafts movement in Britain and the Vienna Secession). From 1901 onwards Krieger taught himself to sculpt and made himself familiar with bronze casting and the art of patination. Two years later he became a partner in the firm Zierhut & Krieger in Munich, which supplied arts and crafts articles such as tableware and jewellery. He began to devote himself to animal sculpture and started freelancing for the Keramische Werkstätten in Herrsching, where he later met his future wife, Emilie Butters, who was a ceramic artist and drawing teacher.

In 1912 Krieger married Emilie Butters, who was at that time the artistic director of the painting department of the ceramic workshops in Herrsching. The couple had five children. In 1927 Wilhelm Krieger was awarded the honorary title of professor by the Bavarian Ministry of Culture.  Wilhelm Krieger's first solo exhibition took place in 1934 at the Städtische Galerie in Nuremberg to the acclaim of contemporaries. From 1937 to 1944 Krieger participated in the annual Great German Art Exhibition in the Haus der Kunst, which was organized in Munich at Adolf Hitler's instigation. The Haus der Kunst was to present what the National Socialists considered "real" German art. Yet there is nothing “National Socialist” about Krieger’s art.

Krieger, hard of hearing since childhood, relied on the power of his pictorial works. Not the written or spoken word, but sculpture was his way of expressing himself. As a child, Wilhelm Krieger was closely attached to the animals of his homeland, which he encountered on his daily walks. His sculptures show mainly mammals native to Germany and often birds: owls, ducks, jackdaws, cocks, falcons, buzzards, eagles, condors, cranes or marabous populated his studio, next to other primarily domestic animals such as cats, dogs, deer and sometimes apes. Krieger’s contemporaries already praised his sculptures for their pure form and admired his ability to highly stylize the animals whilst still capturing their naturalism. Krieger, a self-taught sculptor created very individual works of art reflecting his uniquely personal vision. He was interested in modelling animals without charging them with any symbolic meaning. Krieger did not study nor was influenced by other animalier sculptors. Through stylization and simplification, Krieger created very vivid sculptures, which although very different, have at times because of their smoothness, sleekness and austerity a somewhat similar intensity as the work of the French sculptor François Pompon.

Krieger’s oeuvre encompasses about 200 animal sculptures. His sculptures were cast in bronze. He also carved in limestone or marble. His work was very popular and also edited in porcelain and stoneware by notable companies such as Hutschenreuther, Rosenthal and several other important porcelain manufactures.

In contrast to the porcelain sculptures, which were mass-produced by modellers in porcelain factories far away from the artist, it is the bronzes that show the great craftsmanship and skill of Krieger. He did not miss the opportunity to chisel the surfaces of the bronzes himself, to give the sculptures the final touch and the colour of the surface. Experts praise the unusual and warm colourfulness, as well as the finely detailed and elaborate treatment of the surfaces of Krieger's works.

Krieger's works have already found their way into major museums and collections, and Wilhelm Krieger will certainly also receive his deserved place in the foreseeable future among the ranks of the great German animal sculptors such as August Gaul, Fritz Behn.