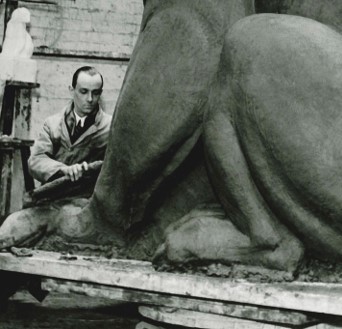 Coming from a family of artists, particularly in the field of drawing, the young Raymond became fascinated early on by the representation of animals. After his graduation, he meets the animal sculptor Albéric Collin who advises him and encourages him to persevere in the field of representing animals.
He then frequented the Antwerp Zoo, where he observed animals, analysed their morphology and attitudes, sketched them on the spot and transposed them into three dimensions, first in a workshop in Etterbeek, then after his marriage, at his home in Woluwe-Saint-Lambert.
Perfectionist at heart, his concern for truth does not lead him to simple photographic accuracy. He transcends his work by capturing the quasi-psychological expression of the animal in an admirable way. When he inaugurated his first exhibition, in March 1927, at the Petite Galerie Avenue Louise in Brussels, the critics were very positive from the outset. They underlined the young artist's gift for detail. Shortly afterwards, he was co-opted as a member of the Cercle des Beaux-Arts de Liège, an event which consecrated his talent and success. The year 1930 was a decisive turning point for Raymond de Meester. Co-opted as a member of the Le Liege group, he exhibited in Ixelles, Namur, Leuven, Mechelen and Brussels. Subsequently, he received an order from the Belgian state for the colonial pavilion at the International Exhibition Centre in Antwerp: a fourteen-metre-long stage representing the capture and training of elephants. The Artistic and Literary Circle of Brussels welcomes him as a member under the patronage of Jean Canneel and Alfred Bastien. Exhibitions followed one after the other (Nice, Paris, Liège, Kaunas, Montreal, Rio de Janeiro, São Paulo, Stockholm, Utrecht, Milan, ...) and orders were flooding in, particularly from abroad. Soon, his works can be found in Paris, Lisbon, Oslo, Buenos Aires, Tallinn, Cairo, Mexico City, Bern, Warsaw, Kaunas, Reims, Krakow... and of course Brussels, Liège, Tervueren at the Museum of Central Africa...

In 1939, he produced a monumental Polar Bear for the Exposition de l'Eau in Liège. In 1958, his Roaring Lion, symbolizing triumphant Belgium, adorned one of the official entrances to the Brussels World Fair in 1958, before being transferred the following year to the Malou Park. On the threshold of his fifties, Raymond de Meester turned to the art of painting.