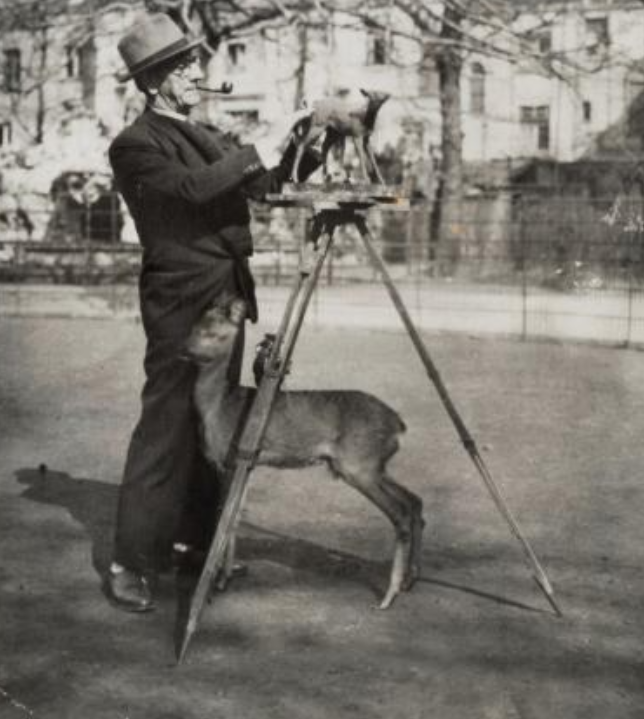 Albéric Collin is today the best-known Belgian animal sculptor. The Third child of a Flemish mother and a father from Liège, Albéric Collin was born in Antwerp on 6 April 1886. A talented sculptor, he studied at the City Academy (where his teachers included Josuë Dupon).  His artistic career began with lively caricatures, and as well with a limited number of compositions with human figures. He soon abandoned sculpting human figures to take an interest in the animals in the zoo. It was there that he met Rembrandt Bugatti, from whom Albéric Collin would say he owed a great deal to Bugatti. His development was crucially influenced by the years of his friendship with Rembrandt Bugatti (1882–1916), who may be regarded as the true inspiration behind Collin’s work. For a sense of Collin’s relationship with this exceptional artist, you have only to refer to an interview that appeared in Le Matin on 27 January 1922: ‘Sometimes in the middle of a task he watched me working, gave me his opinion, briefly, without unnecessary details. He told me what needed to be done, gave me a helping hand here and there, confidently, without hesitating, then he would invite me to finish the evening out with him. Rembrandt advised me, helped me, and pushed me to perfect my art.'

At the beginning of the twentieth century, the Antwerp Zoological Garden, then the largest in Europe, was a popular place for artists. Rembrandt Bugatti - invited in 1907 by the Royal Zoological Society of Antwerp, he settled for seven years in a workshop in the Begijnenwijk - and Albéric Collin, Frans Jochems and an autodidact: Karel Trompeneers, a caretaker of animals tempted in his turn by the adventure of animal sculpture, were certainly to be found there. Collin’s constant attendance over many years at Antwerp Zoo not only led him to meet many Belgian and foreign colleagues, including Raymond de Meester de Betzenbroeck (1904–95) and Paul Jouve (1878–1973), but also, and most importantly, gave him a close knowledge of the animals collected there.

During the First World War, Collin stayed for some time in England, where his sister was a nun, and subsequently moved to the Netherlands. In those years his talents as a caricaturist once again came to the fore in a biting condemnation of the brutalities of war.

The study of Collin’s stylistic development is unfortunately impeded by the fact that only very few sculptures carry a date. Albéric Collin's sculptures are pure, still carry the artist's imprints. The movement is the most important, the details are simplified, the surfaces are fluid. He creates stylized works. He underlines the essence of animals more than their pure physical appearance, suggests states of mind and expresses feelings. Like Bugatti, he attached great importance to the technical quality of the casting and the patina. "After the First World War, he entrusted the casting and patination of his works to Valsuani.

From 1920 onwards, the sculptor took part in numerous exhibitions in Belgium, France and Spain. His work fascinates and, in 1922, as a crowning achievement, his representation of a dromedary earned him a medal of honour at the Salon Des artistes Français in Paris. He participated in this Salon until 1927. »

1930, on the occasion of the Universal Exhibition in Antwerp, the artist executed twelve monumental elephants. They decorated the road to the Congo Palace. Five years later, for the Brussels Universal Exhibition, he installed a huge concrete elephant in front of the Belgian Congo pavilion, ridden by four Africans! A work that can be found today at the entrance of the Tervuren Museum. A first major retrospective was held in Brussels in 1933, and at a second, held in Antwerp Zoo in 1950, more than 100 sculptures were assembled, mostly from private collections.

Albéric Collin died in Antwerp on 27 February 1962. His reputation endures and has crossed the borders of Belgium, going on to conquer France and England. As for his works, they can be discovered in Antwerp Zoo. Then in the Museums of Antwerp, Ghent and Brussels.