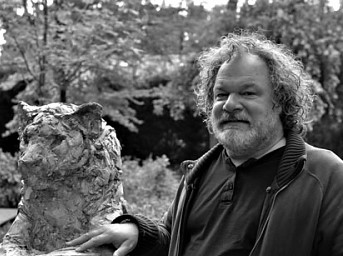 Patrick Villas is a Belgian painter and sculptor. Villas trained at the Royal Academy of Fine Arts and began his artistic career as a painter and later as a sculptor with exhibitions in Belgium and abroad. His public commissions include a life-size jaguar for Antwerp Zoo.

Writer, poet and gallerist Marc Pairon writes about Villas: "Patrick Villas (°1961) is now the leading Belgian animal sculptor of his generation. His oeuvre is characterized by a constant search for the creation of suggestive images, without craft reality. It is, as it were, studies to lift the boundaries of anatomy while maintaining the original suppleness. Villas' new work heralds another phase of that ability. The sculptures are still, at most, the results of the actions. Gestures that slip out of his soul, like a performance. The excess makes way for the self-evident. He shows the nature of the feline. Their character, the inner marks, their instinctive minds. In this way, each animal gets its unique signature, no longer recognizable by the skin of peers".

Villas has been exhibiting all over Europe since the late 1990s and has had a major solo exhibition at the Centre d'Art Contemporain de la Matmut, in St. Pierre-de-Varengeville (near Rouen) in 2016 and an open-air exhibition of monumental pieces in the city of Compiègne in France in 2017. His works have been presented at international fairs such as Tefaf in Maastricht, Masterpiece in London and PAD in Paris.