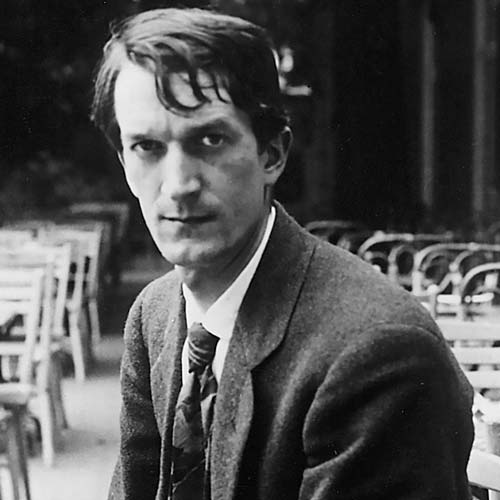 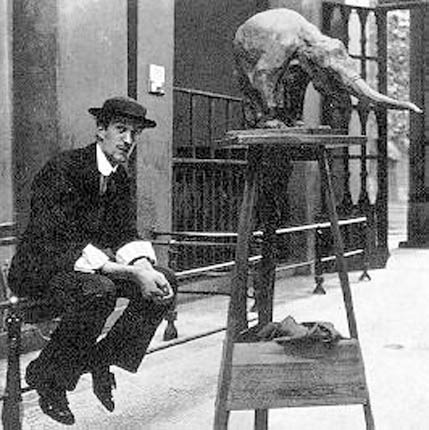 Rembrandt Bugatti was an Italian animal sculptor. He is the younger brother of Ettore Bugatti, founder of the Bugatti cars brand and the youngest son of the decorator and architect Carlo Bugatti (designer and manufacturer of extraordinary furniture).

As a child, he started to sculpt, encouraged by the painter Giovanni Segantini and by Paul Troubetzkoy, a renowned Italian and Russian sculptor and a friend of the Bugatti family. Rembrandt Bugatti will model with plastiline.

In 1901, he created his first work: "Ritorno dal pascolo" (four cows one behind the other on the way home guided by a young farmer). The volume is modelled freehand, the details are simply sketched out to catch the light and fragment the surface into a multitude of interlocking planes, giving the impression of the underlying interplay of bones and muscles. The hooves are pushed into the terrace with broad strokes and the gaps between the legs set the rhythm of the walk.

In 1903, at the age of 19, Rembrandt Bugatti moved to Paris, a city whose influence attracted all the modern artists of the early 20th century. In 1904 Bugatti was taken under contract by the French editor and art foundry owner Adrien-Aurélien Hébrard. The young workshop foreman Albino Palazzolo will be his exclusive moulder and foundry man, helped in his early days, before 1908, by the famous Italian foundry man Marcello Valsuani, Claude Valsuani's father.

Each year, A.A. Hébrard exhibits new works by Bugatti in his Parisian gallery. Every five years, he organizes a retrospective and presents Rembrandt Bugatti in the official salons (always in the Italian Modern Art section) or foreign exhibitions of the time, in Paris, Venice, Milan, Brussels, Berlin, Antwerp and New York.

Literally bewitched by the animal world, the young sculptor found the zoological park of the Jardin des Plantes de Paris insufficient for his inspiration and his models. He moved to Antwerp, Belgium, where the management of the Antwerp Zoo was very welcoming to artists. In 1906, the director of Antwerp Zoo, Michel L'Hoest, put a studio at his disposal. In Antwerp, he befriended the Belgian sculptors Josuë Dupon and Albéric Collin. By the turn of the century, the Antwerp Zoo was already considered the most important zoo in the world. As if the bars of their cages did not exist, Bugatti became accustomed to contemplating wild animals every day: lions, panthers, leopards, jaguars, wolves, vultures, elephants, bears, hippos, Antelopes, pelicans, marabouts,... For fifteen years Bugatti will observe them at length, translating their morphologies, attitudes, behaviour, characters, gait, expressions in plastiline, then in plaster. Rembrandt Bugatti created his statues directly without marks or measurements, without preparatory sketches and with speed in execution.

During the First World War, some of his beloved  wild animals in Antwerp Zoo were put to death. Rembrandt joined the Red Cross to support the wounded. To help his family, who were refugees in Italy at the time, he went to Milan and then decided to enlist in the Italian army in August 1915. In Paris, orders and sales of sculptures collapsed, and the Galerie Hébrard closed. Rembrandt Bugatti returned to Paris in December 1915 and refused to accept further financial aid from his brother Ettore Bugatti, who was himself in financial difficulty, and, suffering from tuberculosis, he could not be with his beloved nephews and his family for the end-of-year reunions. Rembrandt committed suicide in his studio in Montparnasse on January 8, 1916 at the age of 32.