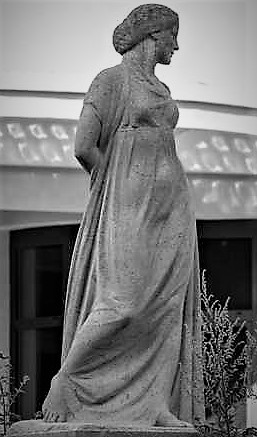 Poncin was a pupil of the sculptor Raoul Verlet. He exhibits at the Salon des Artistes Français, as of 1912. He receives a bronze medal in 1923. In 1929, Albert Poncin is awarded the gold medal at the Salon des Artistes Français in Paris for a plaster representation of the Four Aymon Sons and their horse Bayart. The stone group was erected in Bogny-sur-Meuse (The Ardennes).

He has also exhibited at the National Exposition ‘des Beaux-Arts since 1910’. Rather seldom his work is presented to the market but Poncin seemed to have specialized in groups of dancers, animals and funerary steles. The Musée des Arts Décoratifs in Paris holds in its collection the sculpture of a Panther and the Museum of Modern Art in Paris preserves Nausicaa.

Soldier on horseback and Panther are sculptures and compositions that feature an animal. His works are mainly cast in bronze, but during his career he also worked with the Sèvres factory. Poncin was also a writer and poet.