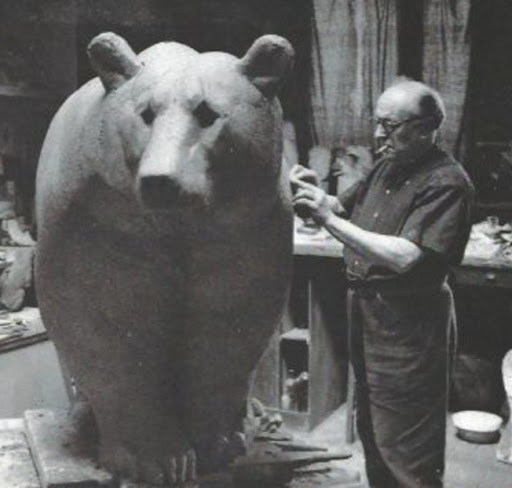 Georges Guyot was born in Paris, in the working class quarter of la Bastille where the majority of artisan craftsmen were based. By the time he reached adolescence his gift for drawing was apparent, and he was apprenticed to a local wood carver. Guyot discovers the works of Barye during a  visiting to the Louvre, and he decides to change tack.  He wants to make animal sculptures and learn to work with other materials. In 1904, during his military service in Rouen, he is allowed to take several courses in the local art school.

In 1906, he exhibited for the first time at the Salon des Artistes Français with a statue of a begging  bear.

In 1909, he exhibited his first work in bronze and concentrated exclusively on sculpture from then on. In 1910, he was awarded a bronze medal. At this time he was exhibiting mainly depictions of dogs and a few busts. These first works were very realistic, but soon after he began to stylize his statues more while preserving naturalism.

Recurring themes in his work are bears, cats and monkeys. Besides a sculptor he was also a good painter, draughtsman and engraver.

Before the Second World War he had many solo exhibitions in some prestigious galleries including Bernheim Jeune, Druet, Devambez and Malesherbes. In 1943 the Salon des Indépendants organized a retrospective of his work. During the 1950s he enjoyed considerable international success. His last exhibition was held in 1972 shortly before his death in Paris. Guyot’s career unfolded with a roll call of successes and honours from the start. Over the years, his work was acquired by numerous French museums. The state also acquired numerous of his monumental pieces, and he always enjoyed acclaim from the critics, appreciation from art lovers, and recognition from his fellow artists, including high profile sculptors such as Pompon, who saw him as a real artistic personality. Pompon invited him in 1931 to  join the group of 12 sculptors who exhibited at Ruhlman in Paris in 1932 and 1933.

His bronzes were cast by Susse Frères, Meroni-Radice, Godard and Valsuani. The posthumous bronzes are mostly cast by Fonderie de la Plaine. Some terracotta models have been edited by Susse and by Sèvres.